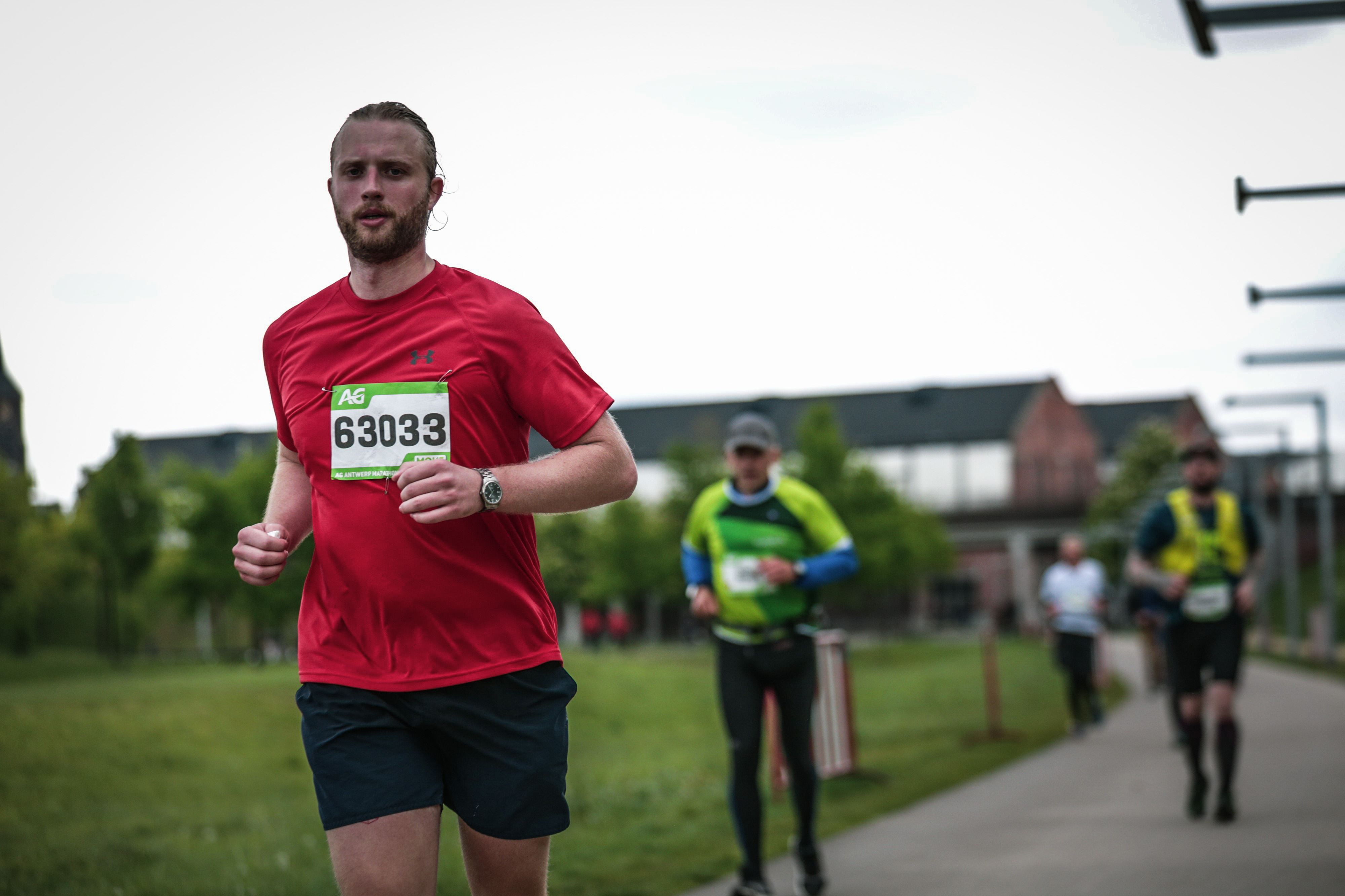 About nine weeks prior to the marathon, I decided I’d train properly and participate. I wanted to participate in last year’s edition, but I didn’t train enough and ended up paying the participation fee without actually participating. I thought I could wing it, but that didn’t go as planned. So this year, with me becoming an uncle for the first time and having moved to a different city, I thought the time was right to do something special (for the baby), discover the city (Vienna) while running and actually finishing the marathon this time.

I had been running on and off for a few months. I could do 10k in about an hour or so, but I wasn’t strict or even organized about my running. I adopted an “as long as I enjoy it”-mentality, which meant I’d go out for a walk with my running clothes, which often turned into a 30-minute running session.

At the end of February, I started with Hal Higdon’s Novice Program in week 9. I liked the schedule because it was easy (no complex heart rate based training, or sprints or whatever. My goal was still to have fun, not to check Runkeeper all the time). I simply adopted the “run short distances faster, long distances slower” mindset, and that was it. During training, I broke my 5k record and my 20k, which I liked. I ran with music or podcasts (especially enjoyed Goggins’ talks with Rogan btw). I kept a video log from (most of) my training sessions. I published the videos here.

I must say that I didn’t do the planned 32km training, as the 29km took me about five days to recover from. That’s the lack of preparation showing up right there. I liked the long runs, but it took me way too long to recover. Last Saturday, six days before the marathon, I did a rather quick 5k and hurt my upper right leg. I couldn’t run for four days. Went for a very slow jog on Friday (two days prior to the marathon) and felt good. My body felt rested, my mind was ready, and all in all I felt that I stuck to my training schedule better than I had anticipated. I’m bad with structure, but apparently picking a big goal is a good strategy for me. Life lesson learned!

Run with the 4h30 pacer and see how it goes, as I don’t have a smartwatch. (The one I’m wearing on the photos is my daily Tissot one, in part in memory of my late grandfather, who would’ve been proud. I wear it 24/7 so I thought it’d make sense to wear it Sunday as well.) Might buy a Forerunner 235 in preparation of the next marathon. Also, I decided to run without music. I talk to myself all the time so I wasn’t concerned with getting bored without music.

Also, I’ve been on a (very) low carb eating regime for about five years now. I woke up at 6.15am, had a glass of water, and left my home at 7 am to get to the race, which is a one hour drive. I planned on running in a fasted state.

I arrived at 8.15am at the “camp.” Picked up my number and dressed up. It was raining. Not pouring, but enough to get wet. Last year’s edition saw degrees up to thirty degrees Celcius, but this year was very different. 8 degrees Celcius and light rain. It was a bit too cold. I planned on running in my Under Armour shirt (the red one) but decided to wear my cotton training shirt on top at the start. I planned on taking this off somewhere during the race, which I did.

I wasn’t really nervous, just happy to start. I didn’t know what exactly to expect, how to think about these things, but to see so many people (3200 participants this year) all lining up to do something quite extraordinary, was very inspiring. It didn’t take me long to find the pacer and get to the start. It was cold though.

Well, I reminded myself of starting slowly, which I did, but after about three kilometers, I ran in front of the pacers. I knew that there was a 4h00 and 4h15 pacer team as well, but I never saw them. Looking back, I should’ve stayed with the 4h30 ones. I think that I sped up/slowed down a little bit between 5-20km, wasting energy for nothing. The 4h30 pacer overtook me around kilometer 35.

It is rainy but I’m still warm. Most people around me are still smiling. We entered a tunnel around km 3, which, looking back, was bad. We went from cold to (very) warm (in the tunnel) to cold again. Also, I took the first drink from the aid station I could get, which was a sugary sports drink (I only wanted to drink water). Oops!

I’m thinking about taking my cotton shirt off. In a sense, it feels warm, but it progressively got wetter and it was weighing me down. The problem was that I suspected the Under Armour shirt to be too cold, which turned out to be true. I got a small blister on my right foot, which was fine. My feet were wet, and I anticipated getting a blister there. Whenever I go on long walking tours, that place is the first one to blisterize.

I’m starting to feel the cold. People’s faces are going from “fuck yeah” to “fuck” and my body is cooling down. Around km 25, while my shoes are completely wet, a certain thought hits me. I was approaching the 2h52 mark, which was my longest training (29km) thus far. I knew that I had that training distance in me, for sure, but I then I still had to do another 13 kilometers. I lost my confidence and thought “fuck it” for the first and only time during this race. The thought of running another 17km (after the 25km mark) sounded terrible, and I was making it harder for myself by taking small walking brakes while drinking (and the break where I took off my shirt and switched my number). It was 11h30 by that time, and I told myself I could take more water, but I’d have to keep moving for at least an hour, until 12h30.

I also starting playing some mind games. I had this 2U song from David Guetta in my head, singing it over and over, and I told myself that if I would quit, I wasn’t allowed to finish GoT season 8. That helped.

Well, it’s 12h30 and I’m still going. I passed the 30km post a bit earlier and I knew that I had it in me. I told my parents, who were joining the course by bicycle, that it would be very hard, but that I would make it. This is where I broke the Murakami rule (“never walk”) and started walking for short distances. It immediately became clear that walking was making things worse, and a quick back-of-the-envelope calculation showed me that walking at 3km/h was way worse than running at 6km/h, especially being as cold as I was. So I tried to minimize the walking and continued running.

We got a glimpse of sunlight around km 35, which was very welcome. I started warming up and I knew that I would make it. That was a great feeling. Most people hit the wall around this period, but energy-wise, I was feeling great. I knew that the low carb people had written about this extensively, avoiding the man with the hammer. I did take two cups of sport drink around this period because I figured that anything could help me, breaking another rule (“never do anything new on race day”), which I technically had broken at the start already: I taped my nipples for the very first time in my life (which I hadn’t done before either) and I’m happy to say that they’re still intact.

Well, I arrived. I imagined that I would either cry or laugh but none of that happened. I was too exhausted. I picked up my bag and a shuttle bus brought us to some hot showers. That was great.

I wish my time would’ve been a bit better, but all in all, I’m happy. It was cold, rainy, but most importantly, I actually enjoyed participating. It definitely didn’t feel like I ran for 4h41. Time seemed to pass by faster than I experienced it. Today, two days after finishing, my body hurts but I’m considering doing a 10k this weekend in my home town. So I’m okay.

I went home and had a spaghetti bolognese and my first glass of red wine after two months (I quit drinking all alcohol when I decided to train properly). I was still in a fasted state (around 18h) so I got a big headache from that glass of wine, and the spaghetti just made things worse 😀 But that’s part of the experience.

I don’t see why I won’t run another marathon this year. I enjoyed it, I know that I can do it, I have all my gear to continue running.